Posted on December 5, 2011 by australian sf-history 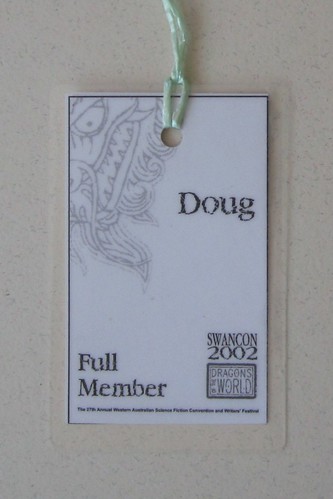 Swancon 2002 was subtitled “Dragons of the World” (to which my brain always automatically adds the word “unite!”).

One side of this badge names me as “Doug”; the other side as “Doug Burbidge”, with the second name under the first and in a smaller font. This would be a great feature, letting me choose how much of my name to casually reveal by which side of my badge is revealed, if only I could control which side of my badge is revealed. (I suppose a box of safety pins at the front desk would allow that.)

The font is stylised (with all the little fracture lines running through it), but this does not greatly detract from readability. The logo is large but greyed out so as to not visually dominate and flood the eye. I like it.

ASFDAP was set up in 2011 after the rediscovery by the wider SF community of an impressive hoard of Australian SF community related ephemera, fanzines and other materials in the Murdoch University basement.
View all posts by australian sf-history →
This entry was posted in SwanCon and tagged badge, Dragons of the World, SwanCon, Swancon 2002, Swancon 27, SwanCon related ephemera. Bookmark the permalink.