Posted on April 3, 2012 by australian sf-history 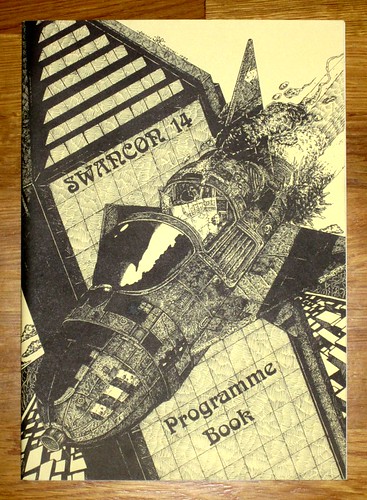 With Swancon 2012 just around the corner, now might be a good time for me to reminisce about my first Swancon, Swancon 14.

I was in the CIA at the time, and Cindy Clarkson visited us and pitched the wonderfulness of Swancons to us. So a bunch of us attended.

It was at the King’s Ambassador (now known just as the King’s), and we didn’t know quite what to expect. (However, the part of the CIA that was into drinking came well prepared.) Most of the King’s con rooms are below ground level, but for quite a number of years they had some office-like space a bunch of floors up (the seventh floor, maybe?), and so that was where gaming was — quite separate from the rest of the con. There was a pool on the roof, too.

We went along en masse to the then-ubiquitous Monty Python panel, where the assembled masses sang the Spam Song, we roleplayed, we crammed far too many people into one hotel room (though UniSFA easily broke our record in a later year), and we generally had a good time. I think one of us may have been reckless enough to play Rail Baron.

(Ah: the ubiquitous Monty Python panel. Perhaps we should bring it back.)

ASFDAP was set up in 2011 after the rediscovery by the wider SF community of an impressive hoard of Australian SF community related ephemera, fanzines and other materials in the Murdoch University basement.
View all posts by australian sf-history →
This entry was posted in SwanCon and tagged programme book, souvenir book, SwanCon, Swancon 14. Bookmark the permalink.