Posted on December 25, 2012 by australian sf-history 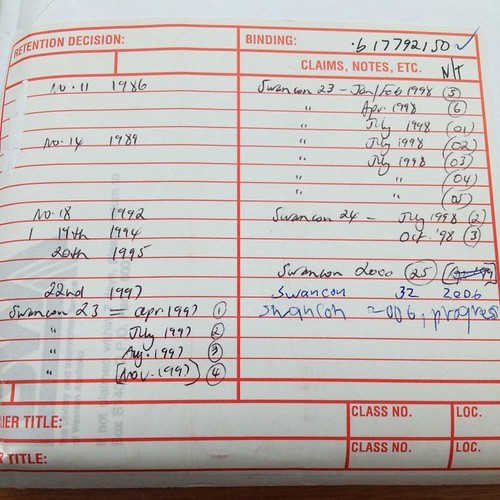 The Battye Library (the State Library of WA) likes to collect periodical publications from organisations like ours, and in various years we’ve conscientiously given them copies of our program book, souvenir book, progress reports, etc.

And in various other years we’ve been not quite so conscientious.

Rachel Turner ventured into the stacks and returned bearing photographs of what we have there. Here’s a transcription of the envelope:

(Nice cataloguing there — it’s almost like they do this professionally or something.)

Rachel also photographed the front covers of the actual items — the envelope lists 22 items, but the photographs show 25. The ones missing from the envelope are newer material (Swancon 2004, Swancon 2009).

Our plan is to fill in some gaps in this from the teetering mound of Swancon history material here at Chateau Hepworth, and then appeal to the community to fill in any remaining gaps.

(Edit: Rachel notes that I transcribed the binding number wrong: it begins with a ‘b’, not a ‘6’.)

ASFDAP was set up in 2011 after the rediscovery by the wider SF community of an impressive hoard of Australian SF community related ephemera, fanzines and other materials in the Murdoch University basement.
View all posts by australian sf-history →
This entry was posted in Fan production, Miscellaneous, SwanCon and tagged archive, Battye, Fan Production, fandom, miscellaneous, Programme, programme book, progress report, SwanCon. Bookmark the permalink.